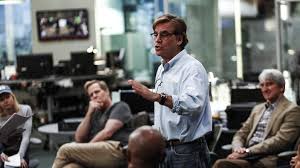 Over 5 years ago, Aaron Sorkin's show "The Newsroom" premiered on American television and today everyone is still talking about Will McAvoy's rant on how America is no longer the greatest country in the world.

A song in a musical works best when a character has to sing— when words won't do the trick anymore.

The same idea applies to a long speech in a play or a movie or on television. You want to force the character out of a conversational pattern.

In the pilot of The Newsroom, a series for HBO, TV news anchor Will McAvoy (Jeff Daniels) emotionally checked out years ago, and now he's sitting on a college panel, hearing the same shouting match between right and left he's been hearing forever, and the arguments have become noise.

A student asks what makes America the world's greatest country, and Will dodges the question with glib answers. But the moderator keeps needling him until...snap.

Will
It's not the greatest country in the world, professor, that's my answer.
Moderator
[pause] You're saying—
Will
Yes.
Moderator
Let's talk about—

Start off easy. First get rid of the two noisemakers.

Will
Fine. [to the liberal panelist] Sharon, the NEA is a loser. Yeah, it accounts for a penny out of our paychecks, but he [gesturing to the conservative panelist] gets to hit you with it anytime he wants. It doesn't cost money, it costs votes. It costs airtime and column inches. You know why people don't like liberals? Because they lose. If liberals are so fuckin' smart, how come they lose so GODDAM ALWAYS!

The fall of Fox?: how rising rightwing media outlets could topple the conservative giant

The Wokest News Stories Of 2020: Taibbi