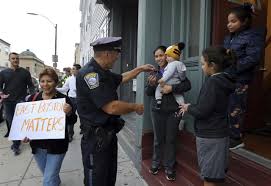 A dozen or so residents, police officers and church pastors set out across the neighborhood, handing out purple wristbands calling for peace and holding handwritten signs bearing messages in Spanish like "Los Jovenes Son El Futuro" (Youth are the Future) and "Juntos Por La Paz" (Together for Peace).

The weekly marches, which wrapped up for the season recently, serve as a reminder of darker times, as well as a continued call for trust between residents and police in East Boston and the communities around it, says Sandra Aleman-Nijjar, a native of El Salvador who organizes the marches.

"We want to let families that have been directly impacted by this violence know that we're with them," she said before the start of a recent march. "We still worry about them."

Police and community leaders in East Boston and other nearby cities where MS-13 has long been active credit a case winding down in Boston federal court for the current break in gang violence.