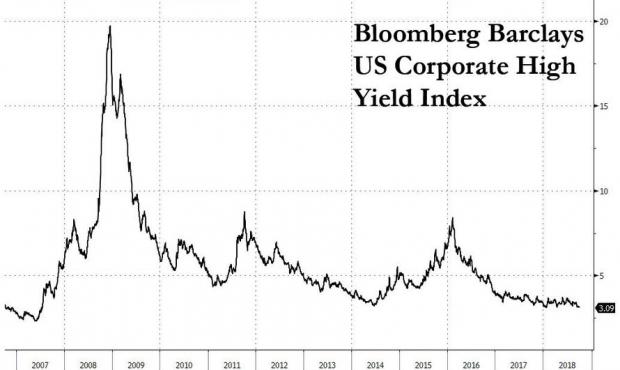 Earlier this week, the euphoria over US high yield bonds hit new post-crisis highs when amid a sharp slowdown in supply, a rise in the oil price and generally solid economic conditions, insatiable buyers of junk sent the Bloomberg Barclays Corporate high yield spread to the lowest since before the financial crisis, dropping as low as 303bps, the tightest level since late 2007 before drifting somewhat wider during the late week bond rout.

Yet while the US high yield market remains remarkably resilient in the face of sharply higher yields, the same can not be said of European junk bonds where the bubble may have finally burst.

As Bank of America's Barnaby Martin writes in his latest research note, in stark contrast to shrinking US spreads, European high-yield spreads have blown out by 70bp wider, with total returns just +13bp, a far cry from the average annual returns of +11% observed over the last decade. Putting this dramatic reversal in context, at the start of the year Euro HY spreads were 80bp tighter than US spreads. Now they are 35bp wider, in large part due to the deterioration in the Italian backdrop, concerns about the end of the ECB's QE and the recent deterioration in the European economy.