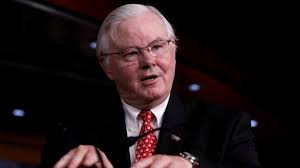 With his resignation, Jenkins joined a growing list of incumbent Republicans who decided to retire early or not seek re-election for a number of reasons, including to seek a different office. Jenkins, too, had unsuccessfully run for U.S. Senate earlier this year.

So far, nearly four dozen Republicans have either resigned, retired, been appointed to other positions, lost elections or announced gubernatorial bids.

Here's the list of Republicans, in the House and Senate, who have announced they will not seek re-election.

Embattled Rep. Joe Barton, R-Texas, announced on Nov. 30, 2017, that he was retiring from Congress.

Barton's announcement came after pressure for him to end his re-election bid mounted. Barton, 69, apologized after a nude photo of him surfaced on social media. He said he engaged in consensual sexual relationships while he was estranged from his second wife.

"I've always listened to people in Texas and worked for them in Washington, and I've been listening to a lot of people the last week in Texas," Barton told the Dallas Morning News in November. "There are enough people who lost faith in me that it's time to step aside and let there be a new voice ... so I am not going to run for re-election."