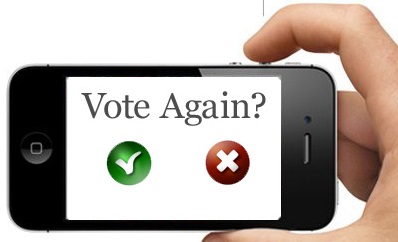 "After researching previously available options, the Secretary's team identified that most electronic ballot delivery technology required access to a desktop computer, printer and scanner, all of which present significant barriers to overseas voters, especially those in combat zones or engaged in covert operations," the W. Virginia Secretary of State's office explained in a press release this week. The state is partnering with a Boston, Massachusetts-based company called Voatz, Inc.

"Voatz has developed a secure mobile voting application that allows voters to receive, vote, and return their ballots electronically," the press release claims. "The application also utilizes blockchain technology to store electronically submitted ballots until election night, and requires a heightened standard of identity verification for users than traditional absentee ballot processes. This project is unprecedented in United States history, being the first mobile voting application and first use of blockchain technology in a federal election."

During the state's primary election in May, a pilot was conducted in two W. Virginia counties with voters in six different countries utilizing the technology. "Post-election security audits by several independent and widely respected technology auditing companies showed that the technology provided a secure platform for voting and an alternative to the traditional absentee paper ballot," the Secretary of State's office declared. "Voatz's app, which also utilizes biometric facial recognition software and thumbprint safeguards to ensure the identity of the voter, increased the confidence of the auditors. In short, the nation's first mobile voting app test pilot was a success."

In order to use the mobile technology, users register with Voatz by taking a picture of their government ID and also a selfie video of their face. Voatz then uses facial recognition software that (they claim) can verify the voter's identity. Once approved, voters can cast their ballots using Voatz's app. After the vote is cast it is added to the blockchain, a digital ledger of sorts, popularized by digital currencies such as Bitcoin.

"Because blockchain is a distributed ledger of transactions, military mobile votes become immutable and tamper-proof once recorded," says Voatz.

The state of W. Virginia admits that there are "substantial" security concerns, but explained that Voatz will be utilizing "federal standards for software development, regular maintenance and security upgrades, in-depth penetration testing, source code auditing and audits of the system's cloud infrastructure. After surpassing those requirements, the pilot moved forward."

A report from Thales eSecurity points out that 71 percent of federal agencies have experienced data breaches. Their 2018 "Data Threat Report" concluded that "federal agencies are experiencing a 'perfect storm" around data that is putting agency secrets, and the private data of over 330 million citizens, at risk."