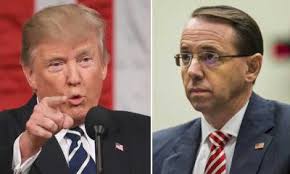 Deep State DOJ tool Rod Rosenstein refuses to comply with Trump's executive order as afforded him by the US Constitution.

Establishment Democrats are all over the mainstream media channels calling the act of releasing documents criminal.

The US President wants every American citizen to see the full, unredacted version of the FISA documents used to spy on Carter Page. Trump is simply asking for full transparency, in what has become a two year, multi-million dollar witch hunt, to find collusion where there is none.

This is all you need to know about the hoax that was and is Trump-Russia collusion and the Robert Mueller special counsel investigation.

The Duran's Alex Christoforou and Editor-in-Chief Alexander Mercouris discuss the insurrection taking place at the US Department of Justice, as Democrats, ex-Obama officials, and DOJ directors are doing everything in their power to make sure the truth, about how the FISA warrant to spy on Carter Page was obtained, remains hidden from the eyes of the American public.