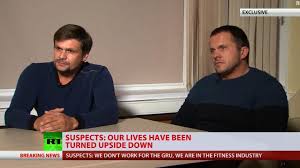 Suffice it to say the whole strange Skripal saga just got a lot more bizarre. The pair told Simonyan in the televised interview that they had nothing to do with it, but were very excited to visit the famous Salisbury cathedral as mere sightseers and were in the Salisbury town briefly on two consecutive days, but that they are not GRU agents or Russian spies.

"Our friends had been suggesting for a long time that we visit this wonderful town," they said, and explained that after the short visit, their "whole lives were turned upside down" as they suddenly became "framed tourists" caught up in the Skripal cause after being falsely accused by UK authorities.

The pair sat stone-faced throughout the interview and delivered brief, concise answers to RT's questions, while consistently claiming to have been visiting Britain as tourists, but while also acknowledging it was indeed them that appeared in CCTV footage published by the UK authorities.

"Salisbury? A wonderful town?" RT's Margarita Simonyan asked. "Yes," Petrov answered tersely. "It is a tourist town," Boshirov offered. "There's a famous cathedral there... It is famous not just in Europe, but in the whole world. It's famous for its 123-metre spire, it's famous for its clock, the first one [of its kind] ever created in the world, which is still working."

YouTube BANS QAnon videos in crackdown on 'conspiracy theories that have been used...