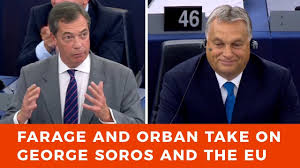 During the parliament session in Strasbourg, France, 448 MEPs voted in favour of invoking Article 7 against Hungary, while 197 voted against the motion and 48 abstained.

According to RT, Article 7 of the 2007 Treaty of Lisbon, often dubbed 'nuclear option', is designed to be applied if there is "a clear risk of a serious breach" of the EU values by one of the member states.

Hungary, led by the right-wing government of Viktor Orban, had been accused by the Brussels of allegedly undermining the rule of law in the country, mainly by standing up to George Soros founded "Universities" and Soros regime change "NGOs".

Orban confronted a hostile EU Parliament, and gave a fiery speech, vowing to keep Hungary independent and free of EU neoliberal, globalist dogma, telling MEPs, "you condemn us because we are not a nation of migrants."