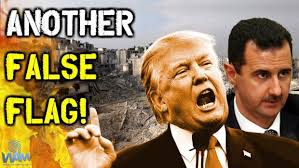 Last week the US warned of military strikes on Syria "if" government forces use chemical weapons (CW). This week, Trump comes clean by dropping any mention of a CW pretext – simply warning Syria not to attack terrorists.

Trump tweeted his warning to Syria, as well as its allied Russian and Iranian forces, to not launch a military offensive to retake control of the northwest province of Idlib. The area is the last remaining stronghold of illegally armed militant groups in Syria. It's potentially the endgame to the nearly eight-year war.

On Monday, Trump said: "President Bashar al-Assad of Syria must not recklessly attack Idlib Province. The Russians and Iranians would be making a grave humanitarian mistake to take part in this potential human tragedy."

The US' top general, Joseph Dunford, the chairman of the Joint Chiefs of Staff, also reiterated seeming anxiety for humanitarian casualties, calling for a "tailored operation."

So, alleged chemical weapons are no longer part of the US rationale. It's basically: don't make any military move. The American president added that "hundreds of thousands of lives" could be lost if Syria and its allies move to rid the province of an estimated 10,000 militants among a civilian population of three million.

Trump's apparent "humanitarian" concern seems alarmist, if not cynical. When did he articulate similar misgivings when US air forces were pounding Raqqa to bits last year, causing thousands of civilian deaths?

This week, Russian and Iranian officials are working with Syria to set up humanitarian corridors in Idlib to remove civilians from harm.

Russian President Vladimir Putin is also due to arrive in the Iranian capital, Tehran this weekend to give impetus for a final peace settlement. Clearing Syria's last bastion of terrorist groups in Idlib is crucial to restoring peace for the entire country. Why are Washington and its allies trying to obstruct that end result?

Trump's dire-sounding reproach of a final military offensive in Idlib marked a significant shift from earlier warnings issued by the US and its NATO allies, Britain and France. All three powers had last week vowed to take military action if chemical weapons were used by the Syrian Army in the anticipated offensive.

Those admonitions were widely seen as an attempt by the Western powers to set up a false-flag provocation to blame the Syrian government forces and thereby give themselves a pretext to launch military strikes against President Assad. For a start, the Syrian government no longer possesses such weapons, having deleted its arsenal under verified UN supervision.