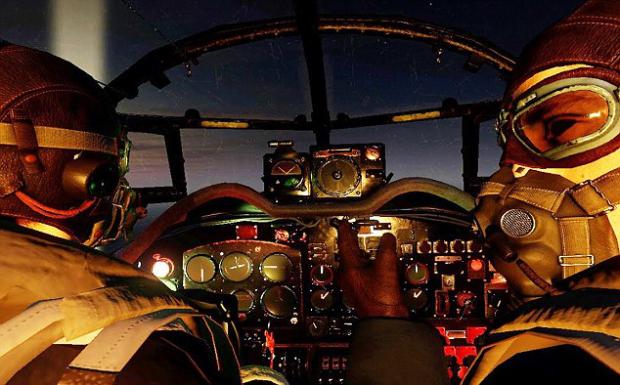 The virtual experience, which is called 1943: Berlin Blitz, puts viewers in the shoes of war correspondent Wynford Vaughan-Thomas on a bombing raid at the height of World War II.

Viewers will see the cockpit of a Lancaster bomber high over Berlin, with Vaughan-Thomas's commentary - based on a genuine broadcast - narrating the experience.

Headsets will be made available on the high street and, once purchased, viewers will be able to access the immersive experience using the BBC VR app on tablets and smartphones, which act as a view screen slotted directly onto the gadget.

The original radio broadcast of Vaughan-Thomas' report went out over the airwaves on September 4, 1943, just hours after the plane landed at RAF Langar in Nottinghamshire.

As the plane flies over Berlin the German anti-aircraft guns attempt to bring it down in what the reporter called 'the biggest fireworks show in the world'.

Some 7,377 Lancasters had carried out more than 150,000 missions by the end of the war including the audacious Dambuster Raids of 1943.

They had also dropped more than 600,000 tons of bombs on the enemy, a feat unequalled by any other plane.