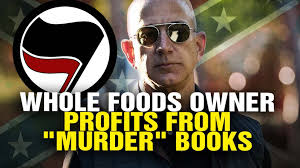 (Natural News) It seems that Amazon's latest tactic for spreading their left-wing disinformation and propaganda is through email. With an undoubtedly massive list of subscribers, the company's reach is practically unmatched. New reports say the latest "fake news" articles by The Washington Post are being emailed en masse by Amazon — the liberal publication's parent organization. If you've got an Amazon account, it may be time to check your subscription settings, if you don't want to be bombarded with propaganda.

As The Gateway Pundit reports, Amazon sent an email to an untold number of customers "denigrating FOX News, Sean Hannity and the majority of Americans that support the current President of the United States." In an effort to promote fake news, Amazon shared a story by The Washington Post which accused Fox News of ignoring the latest news about Paul Manafort and Michael Cohen. As the Pundit notes, these accusations are patently false.

Another WaPo story promoted by Amazon's emails alleged that President Trump worked with his lawyer, Cohen, to "silence two women."  Both stories were selected to serve the left-wing narrative that President Trump is a "criminal" that needs to be impeached. Indeed, the political agenda here is clear. This is not the first time that Amazon has been accused of using technology, in one form or another, to push their political leanings on the masses either.

Global Electric Car Sales Has an Annualized 4+ Million in September

Hundreds Of Companies That Got PPP Loans Have Gone Bankrupt

COVID Unleashes The Undead Army: 20% Of All US Corporations Are Now Zombies

America needs to close down

Amid Pandemic, Big US Retailers Cash In As Small Business Suffers