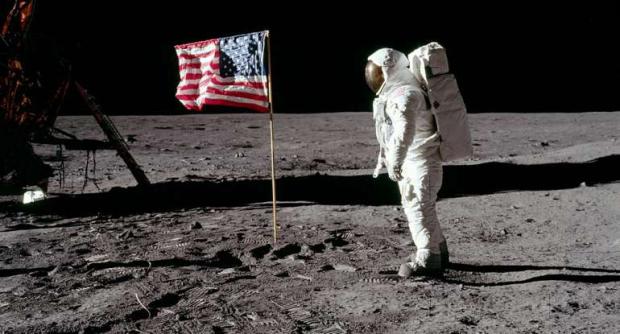 (Natural News) In recent months we've been documenting the American Left's war on our history, culture, and traditions through the use of threats, intimidation, and censorship. Now that effort has extended to one of the most iconic, truly American events of all time: NASA' space program which, in the late 1960s – less than a decade after John F. Kennedy called for it – put men on the moon.

You may have heard that a new movie, "First Man," is debuting this month. It's film about that achievement, starring – ironically – Canadian actor Ryan Gosling as Astronaut Neil Armstrong, one of the first Americans on the moon.

Armstrong and his crew had three key objectives when they landed: Communicate back to Earth the success of the landing, ensure all systems were online and functioning, and place the American flag on the moon's surface.

But because the insane Left has completely taken over what used to be a very patriotic Hollywood (circa before the 1960s), that iconic scene was cut out of the final version of First Man.

It gets worse, however: Twitter has now taken to censoring GIFs for the American flag being planted on the moon by Armstrong as well, in yet another bid by the Left-wing social media behemoths to trash our country.

As reported by The Gateway Pundit, a Twitter user named Clarence Swirly sent a tweet to legendary World War II flying ace and fighter test pilot Chuck Yeager, who at 93 is pretty active (and on Twitter), was critical of Gosling's portrayal.

"@GenChuckYeager Ryan Gosling is coming out with the movie First Man where it portrays Neil Armstrong as a liberal progressive anti Trump (in spirit) non-flag waiver. Probably agree with the National Anthem kneelers, too; at least in Hollywood's liberal imagination. For your Info," Swirly wrote.