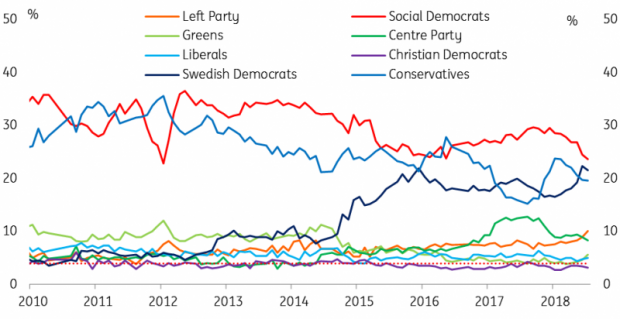 The centre-left tends to favor welfare spending when in power while the centre-right is more likely to pursue tax-cuts, but both are committed to a sound budget underpinned by a fiscal rule.

Fiscal policy is constrained by a requirement to run a structural surplus of 0.33% of GDP over the economic cycle and keep government debt anchored around 35% of GDP. In practice, this means there is limited scope for any government to pursue radically different fiscal policies. And key long-term decisions (e.g. pension reform) have historically been agreed by consensus among the major parties.

But an unfamiliar situation

This election is unusual though, for two reasons. First, the rise of the far-right Swedish Democrat party has disrupted the traditional left vs right dynamic in Swedish politics, and is likely to make it difficult for anyone to form a stable government after the elections.

Second, this year the Swedish krona (SEK) has become a bellwether for global risk sentiment, depreciating at signs of escalating trade tensions or emerging market stress. The wobbly housing market, a peaking economy, and the ultra-dovish Riksbank have also undermined SEK.

The trade-weighted krona index has depreciated 10% since last autumn. We think that in this environment, domestic political uncertainty could easily become another factor driving SEK volatility.