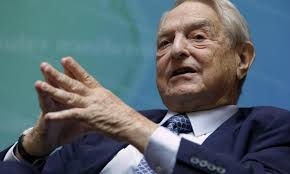 He is the embodiment of the idea floated by John Barth that "Man can do no wrong."

This is something that good writers understand, villains never see themselves as villains.  In their mind, they can do no wrong, that what they are doing is for the common good or a better world.

I'm binge-watching The Americans with my wife (just finished Season 3, no spoilers please) and the slow dawning realization on all of the character's faces that what they are doing is destroying their souls has become the dominant narrative drive.

I suspect that the second half of the show's run will focus on extricating themselves from this nightmare.

This is what makes it compelling story-telling, if massively contrived as all TV storytelling needs to be.

To this day, George Soros still doesn't see himself as the Villain.  But he is.  He always has been.  Not because of his insane devotion to his open society ideology but because of what it has driven him to do in the name of it.