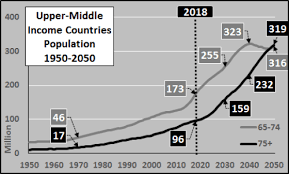 Many look at global population growth as a given to greater consumption... and looking at the chart below of total global population set to hit 7.8 billion by 2020, one might be forgiven for this viewpoint.  However, the reality, when one looks into the numbers, is that growth in global consumption has ended, as I recently detailed, Investing for the "Long Run"? You May Want to Consider This.

This article explains why this population growth will no longer equate to economic or consumptive growth.