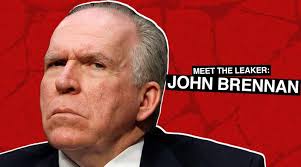 After President Donald Trump revoked his security clearance, John Brennan arose as a Hero of Free Speech. On Twitter, he announced in terms that reanimated the Founding Fathers and marched them down Constitution Avenue: "This action is part of a broader effort by Mr. Trump to suppress freedom of speech. My principles are worth far more than clearances. I will not relent." Twelve former senior intelligence officials agreed, calling Trump's revocation "an attempt to stifle free speech."

No less than Ben Wizner, a director at the ACLU, stated, "The First Amendment does not permit the president to revoke security clearances to punish his critics." Republican Bob Corker, the retiring Senate Foreign Relations Committee chair, said, "It just feels like sort of a…banana republic kind of thing." Admiral William McRaven, former SEAL and bin Laden killing superhero, said of Trump's revocation, "Through your actions, you have embarrassed us in the eyes of our children."

Relax. The only danger here is to John Brennan's credibility as a #McResistance pop idol.