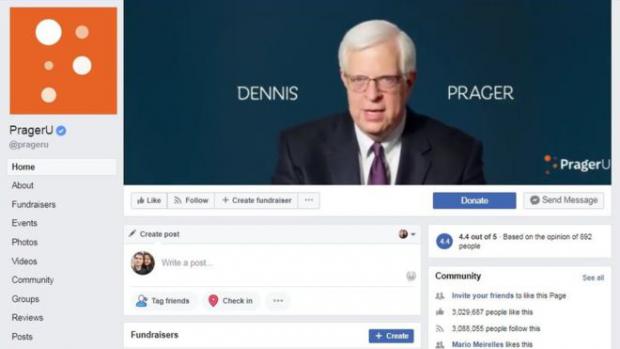 Prager University had said some of the clips had been falsely accused of containing hate speech.

The conservative organisation specialises in publishing short lectures and discussions, but is not an accredited academic body.

Facebook said it had made a mistake, but PragerU claimed the "deliberate" act should concern every American.

The Los Angeles-based institution has previously clashed with Google.

Last year, it sued the firm for placing age restrictions on some of its YouTube clips - a move it described as being an "attack" on conservative ideas. However, a judge dismissed the complaint in March.

And it coincided with President Trump accusing the tech firms of discriminating against his administration's supporters.

PragerU was co-founded in 2009 by the talk show host Dennis Prager to promote five-minute long clips that support what it terms "Judeo-Christian values".

It has more than three million Facebook followers and more than 1.6 million YouTube subscribers, many of whom are under 35.