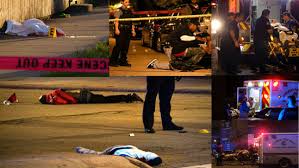 Before last week's mayhem, 1,718 Chicagoans had been shot since the beginning of the year, and 306 had been murdered. Adding to this tragedy is the fact that Chicago's clearance rate is less than 15 percent. That means that in more than 85 percent of Chicago's homicides, no suspect is charged. Chicago is by no means unique in this lawlessness. Detroit, Baltimore, Philadelphia, St. Louis and some other major cities share high rates of homicides.

It's not just shootings and homicides that negatively impact the overwhelmingly law-abiding black residents of these cities. In addition, there are sky-high rates of burglaries, rapes and property destruction. The schools are notoriously bad. City budgets face shortfalls. Residents deal with deteriorating city services. All of this causes mass exoduses from these cities by their most capable people.

Ordinary decency demands that something be done to address the horrible conditions under which so many black Americans live. White liberals, black politicians and sports figures focus most of their attention on what the police do, but how relevant is that to the overall tragedy? According to Washington Post data, as of July 9, 626 people had been shot and killed by police this year. Of that number, 114 were black. Last year, 987 people were shot and killed by police, of which 223 were black (http://tinyurl.com/ycn77jkj). To put police shootings in a bit of perspective, in Chicago alone in 2017, there were 674 homicides, almost 80 percent of whose victims were black. It would appear that if one is truly concerned about black deaths, shootings by police should figure way down on one's list — which is not to excuse bad behavior by some police officers.