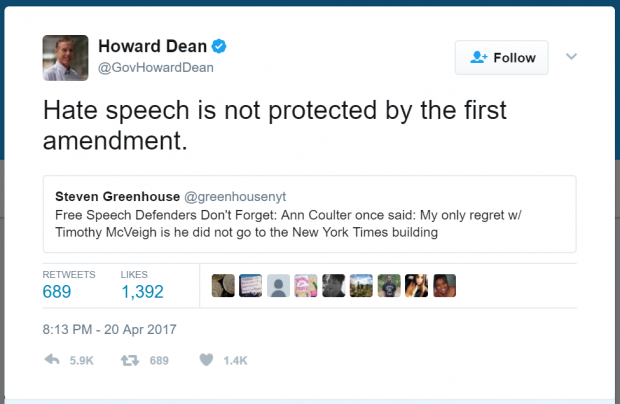 The threat to our future lies in the fact that today's college students are tomorrow's teachers, professors, judges, attorneys, legislators and policymakers. A recent Brookings Institution poll suggests that nearly half of college students believe that hate speech is not protected by the First Amendment.

Of course, it is. Fifty-one percent of students think that it's acceptable to shout down a speaker with whom they disagree. About 20 percent of students hold that it's acceptable to use violence to prevent a speaker from speaking, over 50 percent say colleges should prohibit speech and viewpoints that might offend certain people.  Contempt for the First Amendment and other constitutional guarantees is probably shared by the students' high school teachers, as well as many college professors.

Brainwashing and indoctrination of young people has produced some predictable results, as shown by a recent Gallup Poll. For the past 18 years, Gallup has asked adults how proud they are to be Americans. This year, only 47 percent say they are "extremely proud," well below the peak of 70 percent in 2003. The least proud to be Americans are nonwhites, young adults and college graduates. The proudest Americans are those older than 50 and those who did not graduate from college. The latter might be explained by their limited exposure to America's academic elite.

Johnetta Benton, a teacher at Hampton Middle School near Atlanta, was recorded telling her sixth-grade students, "America has never been great for minorities."