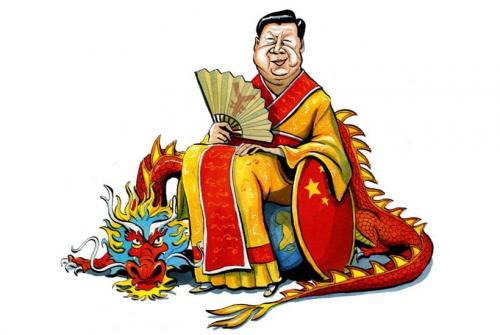 About 6,940 miles west of Washington DC, and at roughly the same latitude, sits Beijing.  Within China's massive capital city, sits the country's paramount leader, Xi Jinping.  According to Forbes, Xi is currently the most powerful and influential person in the world.

Xi, no doubt, is one savvy fellow.  He always knows the right things to say.  He offers the citizens of his nation the "Chinese Dream."  They consume it like boysenberry funnel cakes at the county fair.

So, too, Xi always knows the right things to do.  He elaborates his vision for securing world dominance through something called the Belt and Road Initiative.  His people get behind it without question. But all is not bliss for Xi…

After decades of hard work, dedication, and loyalty to the Communist Party of China, Xi finally rose to the top of the trash heap in 2016.  That's when the party gave him the elite title of core leader.  What a disappointment it must have been to first look out across the geopolitical landscape and see a boorish New York blowhard like President Trump snarling back at him.