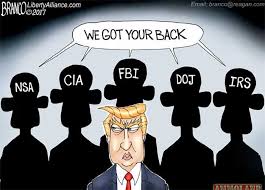 On July 21, I posted on my website a report on the discovery by John Solomon of The Hill magazine that Lisa Page testified to a congressional committee to the effect that the Russiagate probe conducted by Robert Mueller is a cover-up operation to obscure the criminal use of counterintelligence capabilities to spy on Trump's presidential campaign and then to sabotage Trump's presidency.

The evidence is overwhelming that CIA director John Brennan, FBI director James Comey, Robert Mueller, James Clapper, Andrew McCabe, Peter Strzok, Deputy Attorney General Rod Rosenstein, and the Democratic National Committee are engaged in high treason against the American people and the President of the United States and are actively engaged in a plot to overthrow the President of the United States. Yet, the traitorous intelligence officials retain their high security clearances and have not been indicted, arrested, and put on trial for high treason. Rosenstein and Mueller haven't even been fired from their high positions where they continue to operate in behalf of the overthrow plot.

It shows the untouchable power of the military/security complex when its operatives are so far beyond the reach of law and accountability that they can commit high treason with no consequences to themselves.

The US presstitute media works full time to protect these traitors, because the presstitutes hate Donald Trump and the Americans who elected him much more than they love the US Constitution and the rule of law. This makes the presstitutes accomplices to high treason and subject to arrest and prosecution.

Robert Gates and Those 'Transfer Cases'

What EVERYONE IS MISSING ABOUT AFGHANISTAN And The Taliban's CIA ROOTS!!!