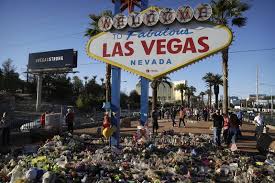 In the most outrageous act committed by a corporation in a long time, MGM Resorts International is brazenly suing the survivors of the deadly mass shooting that took place in Las Vegas on October 1, 2017.

MGM owns the Mandalay Bay Hotel, the site from where Stephen Paddock opened fire on a crowd of country music concertgoers last year. No motive has ever been assigned to Paddock, so we still don' know WHY he opted to kill 58 people and injure 515 more. There are far more questions than answers, and oddly, several survivors who were speaking out about the incident died shortly thereafter. The act appeared to have been premeditated, as video footage released by the hotel showed him wheeling numerous bags, which we know now contained weapons and ammunition, up to his room.

But now, insult is being added to injury and trauma.

The unprecedented move from MGM Resorts International to sue hundreds of victims of last year's mass shooting in Las Vegas using an obscure U.S. law never tested in court has been framed by the casino-operator as an effort to avoid years of costly litigation…

The company is not seeking money in the lawsuits filed in at least seven states over the deadliest mass shooting in modern U.S. history. Instead, it wants federal courts to declare that it has no liability to survivors or families of slain victims under a federal law enacted after the Sept. 11 terror attacks.

MGM argues that the Oct. 1 shooting met two conditions of the law: it qualifies as an act of terrorism and federally certified security services were used at the venue where 22,000 concertgoers were gathered as gunfire rained down from the company's Mandalay Bay casino-resort…

…MGM's lawsuits target victims who have sued the company and voluntarily dismissed their claims or have threatened to sue after a gunman shattered the windows of his hotel suite and fired on a crowd of country music fans. Stephen Paddock killed 58 people and injured hundreds more before killing himself.

Campaigns warn of chaos ahead of Nevada caucuses

Multiple reports of UFO 'travelling at 1,000mph' over Las Vegas as video emerges