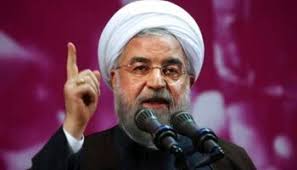 Update: Iranian Foreign Minister Mohammad Javad Zarif mimicked President Trump's rhetoric by echoing the President needs to "be cautious" and that he is "unimpressed."

The former Islamic Revolutionary Guard Corps (IRGC) commander in chief, Mohsen Rezaei, appears to have tweeted that it is Trump who needs to be cautious because 50,000 US troops are under "Iran's sword."

"When more than fifty thousand of your forces are under Iran's sword, it's you who need to be cautious but instead you make demented threats," said the early Monday tweet from @ir_rezaee.

Additionally, National Security Adviser John Bolton confirmed in a statement that Trump fully backs his all-caps ultimatum tweet against Iran saying the country could "pay a price like few countries have ever paid before."

"I spoke to the President over the last several days, and President Trump told me that if Iran does anything at all to the negative, they will pay a price like few countries have ever paid before," said Bolton in a Monday statement.