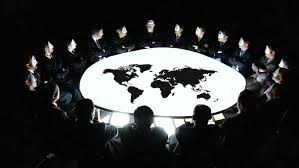 There are those who will tell you that any mention of a New World Order government—a power elite conspiring to rule the world—is the stuff of conspiracy theories.

I am not one of those skeptics.

What's more, I wholeheartedly believe that one should always mistrust those in power, take alarm at the first encroachment on one's liberties, and establish powerful constitutional checks against government mischief and abuse.

I have studied enough of this country's history—and world history—to know that governments (the U.S. government being no exception) are at times indistinguishable from the evil they claim to be fighting, whether that evil takes the form of terrorism, torture, drug trafficking, sex trafficking, murder, violence, theft, pornography, scientific experimentations or some other diabolical means of inflicting pain, suffering and servitude on humanity.

1 Comments in Response to A New World Order: Brought to You by the Global-Industrial Deep State

Whitehead is forever coming up with fake enemies and fake solutions. "Governments" force people to pay them. That is and always has been the problem. Once the people of the planet face that fact, the solution will come naturally.