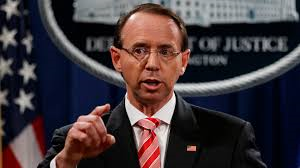 The indictments were announced by Deputy AG Rod Rosenstein as part of Mueller's counsel probe into potential coordination between the Trump campaign and Russia.

The charges include conspiracy to commit an offense against the U.S., conspiracy to launder money, and aggravated identity theft - along with releasing the stolen emails on the web.

Rosenstein said two separate Russian units of the GRU intelligence agency stole emails and information from Democrats and then disseminated it via online personas, DCLeaks and Guccifer 2.0. He also said there's no allegation in the indictment that any American was involved in the operation. -Bloomberg

The Russians are accused of hacking into the computer networks of the Democratic National Committee, the Democratic Congressional Campaign Committee and the presidential campaign of Hillary Clinton, and then releasing stolen emails on the internet in the months before the election. Of course, that probably means that someone at the DOJ finally has access to the DNC Server - i.e., Exhibit A - which oddly enough, nobody from either the CIA or FBI had asked to see at the time of the alleged hack.

It seems to be a pervasive strategy of US power-brokers to accuse foreign governments of doing what they themselves are doing. In this case the accusation can be summarized as, "covertly meddling with the outcome of US elections in order to bias the outcome of the US political process." Am I the only one seeing the HYPOCRISY of that accusation? The US government, through the efforts of its diplomatic corps, its intelligence services, its economic sanctions, and its direct military interventions, has overtly and covertly subverted the political processes of HUNDREDS of countries in Central and South America, Europe, Africa, and Asia and has openly touted its goals of "regime change". And these actions have caused the deaths and excruciating suffering of hundreds of millions of people. If anyone has the moral high-ground on this issue, it certainly isn't the US government.