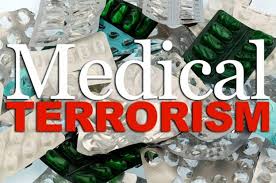 Leslie Kenton concludes, "It's little wonder that people are confused about where to go and what to do when they get ill. I personally hear all about this, because I mentor hundreds of men and women throughout the world. They become overwhelmed by the media propaganda and aggressive advertisements they see on television. Our medical industrial complex has turned into a bizarre conglomeration of misinformation, lies and deceptions designed to further the corporate agendas of Big Pharma, government regulatory bodies and mainstream medicine, with little regard for human wellbeing."

Where did all the madness (pharmaceutical terrorism) come from. Well we can go back to the beginning, and now see in the end "Bayer-Monsanto, soon to be just Bayer, which owns 60% of proprietary seeds and 70% of agrochemicals in the world. There are a lot of industries that wreck havoc on our world. One just has to think of the biggest global banks and oil companies. Think plastics and now think of telecommunication companies that are lusting to bombard us with even more microwave frequencies via their rollout of G5. But there is one field that is much worse than all others: agro-chemicals. At some point, not that long ago, the largest chemical producers, who until then had kept themselves busy producing Agent Orange, nerve agents and chemicals used in concentration camp showers, got the idea to use their products in food production," writes the Automictic Earth.

Everywhere we go in modern medicine there are dangers that can ruin your life. Even safe procedures are dangerous. For example, "When a doctor orders an MRI, it's usually is to help detect or rule out something potentially life-threatening, or at the very least, something that could make you seriously ill. But, it's recently come to light that this rather routine diagnostic test, meant to help you, can have devastating effects on your health."

Why are MRIs dangerous? It is not the frequencies MRI employs, it is the contrast agent that they often use. Gadolinium is a metallic element with magnetic properties. It is injected into about one third of patients getting an MRI, in order to enhance imaging. If your doctor has ever ordered an MRI with "contrast" for you, you were exposed to gadolinium. But most likely you had no idea you were being injected with a known neurotoxin, capable of inhibiting mitochondrial function (energy production) and causing oxidative stress.

Bayer experimental drugs were tested on Auschwitz prisoners. One of the SS doctors at Auschwitz, Dr. Helmut Vetter, a long-time Bayer employee, was involved in the testing of Bayer experimental vaccines and medicines on inmates. He was later executed for giving inmates fatal injections. "I have thrown myself into my work wholeheartedly," he wrote to his bosses at Bayer headquarters. "Especially as I have the opportunity to test our new preparations. I feel like I am in paradise."

18 Reasons I Won't Be Getting a COVID Vaccine

Today's DIRTY VACCINES and the coinciding spike in blood disorders, allergies and autism

Moderna's Top Scientist: 'We Are Actually Hacking the Software of Life'

This Woman Died In 2020 Attempting To Warn The People About Vaccines...