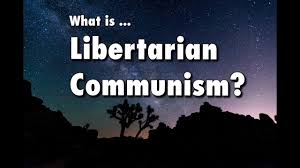 A few weeks ago I decided I probably wouldn't raise this point anymore – that libertarianism and communism have more in common than many libertarians would care to admit; in fact, subtract private property (which, I admit, is a meaningful subtraction), and you might not be able to tell the two apart in a line-up.  I decided that making this philosophical connection was much too complicated for something as simple as one of my blog posts (albeit, one of my more significantly researched blog posts).

So…why did my resolve on this matter evaporate so quickly?  It is due to a post by Brian Doherty, who is excited about his twice-in-a-lifetime "evidence" of Ron Paul's bigotry.  I won't get into defending Ron Paul about his supposed bigotry; Dave Smith has done a very good job of this.  In any case, one has to have nothing other than an agenda to attack Ron Paul for such an issue.

You know, I also resolved several months ago to no longer poke at other libertarians.  I have been really good about this, but…as you can see…I am also breaking this resolution.  For this, I have nothing to blame other than my respect for Dr. Paul.  So I blame Dr. Paul for causing me to hold him in such high respect such that my spine wouldn't hold.

…raising a stink about these supposed depredations of "cultural Marxism" is in most contexts anti-liberty.

I really could leave it here, "Exhibit A" to my assertion of these kissing philosophical cousins.  But I won't.  (NB: If you think Reason.com is not representative of mainstream libertarian opinion in the US, you haven't checked the Alexa ranking.)

As I said, I won't leave it here.  I would like to take the opportunity to demonstrate that libertarians such as these are either idiots when it comes to political philosophy or they are communists.  Either way, they are doing the work of the communists.

So, first for the idiots: any idiot can do the first step in an analysis, the first-order ramification of any action.  This applies whether to economics, political philosophy, or any other subject more complicated than two plus two equals four. One need not have an IQ above "idiot" to be qualified to perform such an analysis.

1 Comments in Response to Libertarian Communists

Incrementalism Versus the Libertarian Non-Aggression Principle

Ron Paul: The Untold Story Of The Man Who Inspired A New Generation Of Liberty Lovers

Ron Paul: The Untold Story of the Man Who Helped Inspire a New Generation of Liberty Lovers