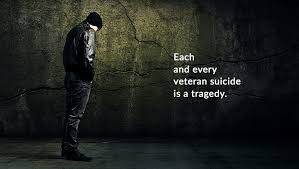 New Orleans, LA — Veterans from all over the United States gathered in front of the New Orleans VA hospital Sunday morning for a march to raise awareness for the epidemic of veteran suicides currently gripping the nation.

It is no secret that the leading cause of death among active duty troops deployed to the Middle East is not combat or accidents, or IEDs — it's themselves. The Pentagon's own statistics show that this is a crisis but it is being ignored.

In 2016, the Pentagon examined the numbers, noting that a total of 55 US troops, in both hostile and non-hostile situations, lost their lives in foreign occupations. The number of soldiers who killed themselves was nearly 5 times that amount.

Not only are active duty soldiers tragically ending their own lives at an increasing rate, but once they finish their service, these numbers skyrocket. While the suicide rate for active duty members is certainly shocking, veterans kill themselves at a rate nearly 200 percent more.

The most recent data shows that a veteran kills himself or herself in the United States about every 65 minutes. That is 8,000 veterans a year.

If we look at attempted suicides, that number skyrockets once more to 19,000 attempts, of which 8,000 result in ending their own lives.