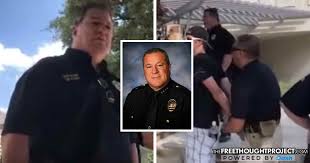 Leon Valley, TX — Over the weekend, the chief of police for the Leon Valley Police Department called a late-afternoon press conference to address police accountability activists live-streaming officers. However, as soon as the conference began, chief Joseph Salvaggio began arresting people and then detained the entire crowd.

Over the past two months, Salvaggio has been the subject of multiple videos and independent media articles for his alleged corruption. According to the group National Association for Individual Rights, the controversy began on May 2, when Jesus Padilla was arrested while filming inside Leon Valley City Hall.

It continued into last week. As TFTP reported, multiple people were arrested for their freedom of speech last week as they desecrated a Thin Blue Line American flag.

On June 18, the group started outside in front of city hall where they flew the thin blue line flag upside down and then painted it red and tore it. The protest then moved into the building where the protesters gathered in the lobby showing police what they had done to the flag. Within minutes they were all arrested and their phones confiscated.

The press conference appears to be a likely attempt to suppress this rising but entirely legal opposition. As the conference began, Salvaggio announced the immediate arrest of one of the activists.

"First and foremost," said Salvaggio as he walked out of city hall and approached the crowd that gathered. "Bao come over here, you're under arrest."

According to a press release from NAIR:

Bao Nguyen, the first person arrested at the press conference, was charged with Retaliation, a Third Degree Felony. Texas hate crime laws criminalize the act of publishing public information about police officers, such as a home address. The law also criminalizes speech that threatens police or public servants.

James Springer was also charged with Felony Retaliation. Nguyen and Springer were each released Sunday on $5,000 bond. Although police have not released official arrest affidavits, activists speculate the police used YouTube comments made by internet viewers during live videos to justify the arrests.

Is an Interstate Travel Mandate Coming Soon For the Unvaccinated?

Report: Locked Down Australians' Alcohol Intake Monitored And Restricted By The State

THEY WILL REAP WHAT THEY SOWED

Authoritarianism Pandemic Is the Real Threat

Australian powers to spy on cybercrime suspects given green light