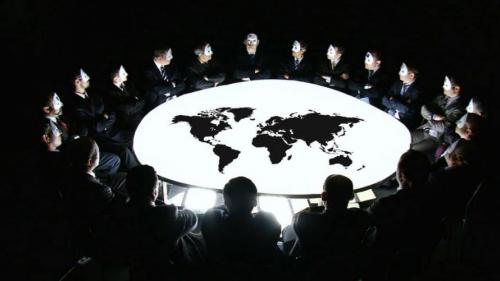 The beginning of the end of the Bilderberg/Soros vision is in sight. The Old Order will cling on, even to the last of its fingernails. The Bilderberg vision is the notion of multi-cultural, international cosmopolitanism that surpasses old-time nationalism; heralding the end of frontiers; and leading toward a US-led, 'technocratic', global economic and political governance.

Its roots lie with figures such as James Burnham, an anti-Stalin, former Trotskyite, who, writing as early as 1941, advocated for the levers of financial and economic power being placedin the hands of a management class: an élite – which alone would be capable of running the contemporary state – thanks to this élite's market and financial technical nous. It was, bluntly, a call for an expert, technocratic oligarchy.

Burnham renounced his allegiance to Trotsky and Marxism, in all its forms in 1940, but he would take the tactics and strategies for infiltration and subversion, (learned as a member of Leon Trotsky's inner circle) with him, and would elevate the Trotskyist management of 'identity politics' to become the fragmentation 'device' primed to explode national culture onto a new stage, in the Western sphere. His 1941 book, "The Managerial Revolution," caught the attention of Frank Wisner, subsequently, a legendary CIA figure, who saw in the works of Burnham and his colleague a fellow Trotskyite, Sidney Hook, the prospect of mounting an effective alliance of former Trotskyites against Stalinism.

But, additionally, Wisner perceived its merits as the blueprint for a CIA-led, pseudo-liberal, US-led global order. ('Pseudo', because, as Burnham articulated clearly, in The Machiavellians, Defenders of Freedom, his version of freedom meant anything but intellectual freedom or those freedoms defined by America's Constitution. "What it really meant was conformity and submission").

In short, (as Paul Fitzgerald and Elizabeth Gould have noted), "by 1947, James Burnham's transformation from Communist radical, to New World Order American conservative was complete. His Struggle for the World, [converted into a memo for the US Office of Strategic Services (OSS, the forerunner of CIA)], had done a 'French Turn' on Trotsky's permanent Communist revolution, and turned it into a permanent battle plan for a global American empire. All that was needed to complete Burnham's dialectic was a permanent enemy, and that would require a sophisticated psychological campaign to keep the hatred of Russia alive, "for generations".

What has this to do with us today?

A 'Burnham Landscape' of apparently, 'centrist' European political parties, apparently independent think-tanks, institutions, and NATO structures, was seeded by CIA – in the post war era of anti-Sovietism – across Europe, and the Middle East – as part of Burnham's 'battle plan' for a US-led, global 'order'. It is precisely this élite: i.e. Burnham's oligarchic technocracy, that is facing political push-back today to the point at which the Liberal Order feels that it is struggling for its very survival against "the enemy in the White House", as the editor of Spiegel Online has termed President Trump.

What has caused this?

Well, like him or hate him, President Trump has played a major part, if only by saying the unsayable. The rationality or not inherent in these Eckhart-style 'unsayings', or apophasis, is beside the point: Trump's intuitive 'discourse of saying the unsayable' has taken most of the bolts out of the former Burnham-type, ideological structure.

But in Europe, two main flaws to the Burnham blueprint have contributed, possibly fatally, to the blueprint crisis:

Firstly, the policy of populating Europe with immigrants, as a remedy for Europe's adverse demographics (and to dilute to the point of erasure, its national cultures): "Far from leading to fusion", writes British historian, Niall Ferguson, "Europe's migration crisis is leading to fission. The play might be called The Meltdown Pot … Increasingly … the issue of migration will be seen by future historians as the fatal solvent of the EU. In their accounts Brexit will appear as merely an early symptom of the crisis".

And secondly, the bi-furcation of the economy into two unrelated, and dis-equal economies, as a result of the élite's mismanagement of the global economy, (i.e. the obvious the absence of 'prosperity for all').

Trump evidently has heard the two key messages from his constituency: that they neither accept to have (white) American culture, and its way-of-life, diluted through immigration; and, neither do they wish – stoically – to accommodate to America's eclipse by China.

LIVE From Porcfest 2020 with Josh Sigurdson!