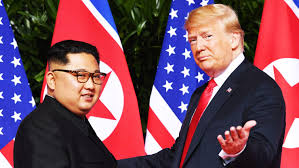 An implicit coalition of corporate media, Democratic partisans and others loyal to the national security state are actively hostile to any agreement that would endanger the continuation of the 70-year-old Cold War between the United States and North Korea.

The hostility toward Donald Trump on the part of both corporate media (except for Fox News) and the Democratic Party establishment is obviously a factor in the negative response to the summit. Trump's dysfunctional persona, extremist domestic strategy and attacks on the press had already created a hyper-adversarial political atmosphere that surrounds everything Trump says or does.

But media coverage of the Singapore summit shows that something much bigger and more sinister is now in play: a consensus among foreign policy and national security elites and their media allies that Trump's pursuit of an agreement with Kim on denuclearization threatens to undo seventy years of U.S. military dominance in Northeast Asia.

Those elites are determined to resist the political-diplomatic thrust of the Trump administration in negotiating with Kim and have already begun to sound the alarm about the danger Trump poses to the US power position. Not surprisingly Democrats in Congress are already aligning themselves with the national security elite on the issue.

The real concern of the opposition to Trump's diplomacy, therefore, is no longer that he cannot succeed in getting an agreement with Kim on denuclearization but that he will succeed.

The elite media-security framing of the Trump-Kim summit in the initial week was to cast it as having failed to obtain anything concrete from Kim Jong-un, while giving up immensely valuable concessions to Kim. Almost without exception the line from journalists, pundits and national security elite alike compared the joint statement to the texts of previous agreements with North Korea and found that it was completely lacking in detail.

Thus The Washington Post quoted a tweet by Richard Haas, chairman of the über-establishment Council on Foreign Relations, that the summit "changed nothing" but "makes it harder to keep sanctions in place, further reducing pressure on North Korea to reduce (much less give up) its nuclear weapons and missiles."

Kim Jong-Un 'is in a coma and his sister is set to take control' of North Korea...

North Korea to Cyberattack US Election?