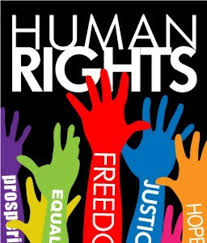 Uttering the phrase contradicts your claim. Humans created language in order to constructively communicate. Language is real because people agree on the meaning of words.

In the same vein, humans created the concept of rights to facilitate peaceful human interaction. Rights are real because people agree (sometimes without realizing it) on what constitutes a right.

Even as someone utters, "rights don't exist," they are exercising their most basic human rights.

"We hold these truths to be self-evident, that all men are created equal, that they are endowed by their creator with certain unalienable rights, that among these are life, liberty, and the pursuit of happiness." -Thomas Jefferson, The Declaration of Independence (emphasis added)

But Thomas Jefferson knew what he was writing. Despite his faults, he knew that he was setting the stage for women, blacks, and all people to be free.

And whether God, nature, the universe, Gaia, Allah, or whatever life force exists; humans are naturally born free.

This means rights are the free exercise of your will.

Absolutely every peaceful action you take is your right. When an action is measurably harmful to another person, that is where rights stop.

This framework ensures no conflict or contradiction between the ultimate exercise of your free will and the ultimate protection against those who would interfere with your freedom. This recognizes the equality of everyone.

When Thomas Jefferson wrote, "among these rights," he was laying a foundation. Life, Liberty, and the pursuit of happiness encapsulate every other right.

Another way of saying this is the right to self-ownership. You own yourself. That is why rights cannot extend past the point of harming others. Once your actions hurt someone, you have violated their right to self-ownership. You are no longer dealing only with your life, your liberty, and your happiness. You have affected another person's rights. You have taken their freedom to choose what happens to their most precious property, their own being.