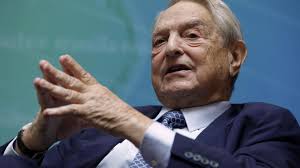 A string of hard-hitting defeats has thrown billionaire George Soros for such a loop that he's now claiming President Donald Trump is about to blow up the whole world.

In a new interview with The Washington Post, Soros nursed new wounds – and old grudges.

Soros said that Trump is so egotistical that he "is willing to destroy the world."

Trump can't even stop our country's slide toward nuclear Armageddon, because the president is a "narcissist" who "considers himself all-powerful," Soros said.

If Soros wants to warn the world about a delusional, destructive oligarch, he should look in the mirror.

The 87-year-old billionaire donated billions in campaign contributions to make himself a global kingmaker – but he considers himself more than a king.

Soros once admitted that he "fancied myself as some kind of god."

"If truth be known, I carried some rather potent messianic fantasies with me from childhood," he added.

"It is a sort of disease when you consider yourself some kind of god, the creator of everything," Soros said. "But I feel comfortable about it now since I began to live it out."

Soros' warnings that Trump will wipe out the entire planet are even more ironic, coming just days before the president brokered a diplomatic agreement that some experts believe will pave the way to peace in North Korea.

For most people, ending the real threat of nuclear war after 65 years would be an answer to many prayers. But to Soros, it's another humiliation that made him lose face in front of his fellow billionaires.

Soros publicly said that America had to stop trying to disarm the regime and "come to terms with North Korea as a nuclear power."

In January, Soros told the globalist elites at the Davos World Economic Forum that, since Trump refused to relent and let the Pyongyang keep its nuclear arsenal, "the United States is set on a course toward nuclear war."