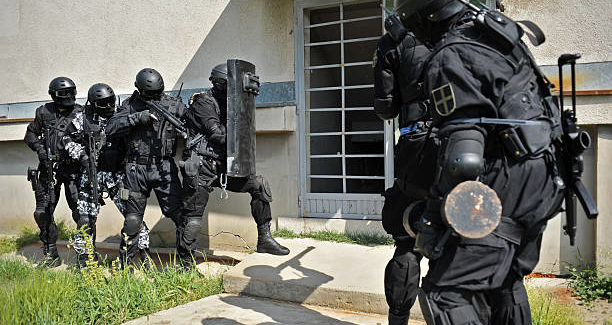 I have avoided writing about David Hogg up to this point because I don't find him particularly relevant. His stale arguments in favor of gun control are not novel or compelling. He uses bully tactics to force businesses and people to bend to the will of the anti-gun lobby.

But something just happened to David Hogg that is a bigger threat to Americans than mass shootings. He was "Swatted." Someone called the SWAT team and falsely reported a hostage situation at the house David Hogg lives in with his parents and sister.

The LA Times reports in an article called 'Swatting' David Hogg Wasn't a 'Prank', it was attempted murder:

Parkland, Fla., shooting survivor turned anti-gun activist David Hogg avoided another potentially deadly incident Tuesday — after police armed with assault rifles kicked down the door of his family home. Broward County sheriff's officials were responding to a call that Hogg and his family had been taken hostage by an assailant armed with an AR-15.

That call turned out to be false.

Hogg, thankfully, was out of town when police arrived at his doorstep en masse — prepared for a shootout with an armed menace.

The teenager was gracious enough to write the incident off as "just a silly prank" — language that was echoed by local police and a number of prominent media outlets.

This was not a prank. A prank is ordering 10 pizzas to someone's home who didn't ask for them. Or asking if someone's refrigerator is running.

If initial reporting about the incident proves accurate, this was attempted murder.

Isn't that sad that calling the police to someone's house is attempted murder? But it is true. The trigger happy standing army of militarized police terrorize America daily–whether they intend to or not.

The Rise of No-Knock SWAT Raids

In December, a 28 year old man named Andrew Finch was shot and killed by a police sniper when he answered the door after a SWAT team surrounded his house. The police will not say who fired the fatal shot, but whoever it was will not be punished. They claim that the man made a sudden move, or reached for his waistband–all the justification police need for murder in the land of the free. The man was a victim of a Swatting "prank," even though the address given was the wrong address for the intended target.

Andrew Finch's family has sued the city alleging that the officers used excessive force and were inadequately trained. A man has been arrested and charged with making the false emergency call, and involuntary manslaughter.

According to the book the book Rise of the Warrior Cop: The Militarization of America's Police Forces, SWAT teams were originally justified on the basis that they would only be used in the most dangerous situations involving hostages, terrorists, and dangerous criminals.

But mission creep meant that SWAT teams were used ever more frequently for a broader range of activities as the years wore on.