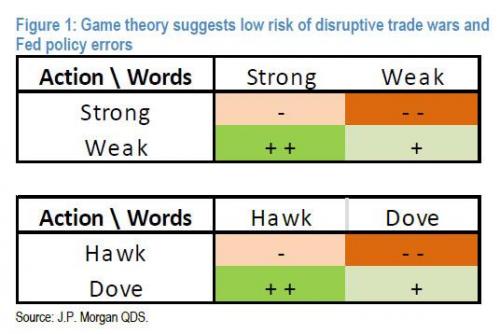 Three months ago, in the aftermath of the February VIXplosion and when the shape of Trump's protectionist agenda was only just starting to take shape, JPM's head quant, Marko Kolanovic made a simple prediction: despite all his posturing, Trump would never dare to pursue an aggressive trade war that destabilizes markets for one simple reason - if stocks crash, it would make a Democratic victory more likely in the midterms, which in turn raises the threat of Trump getting impeached.

The JPM quant also laid out the various possible outcomes between trade war and Fed policy error in terms of a game theoretical "prisoners' dilemma" matrix, as follows:

A significant trade war started by this administration would destabilize global equity markets. Should this happen ahead of the November election, it would impair the administration's 'market scorecard' and likely lead to an election loss. Lost elections open a path to impeachment, and other complications. The game is also non-zero sum, as one can both use tough rhetoric and at the same time do little disruptive action (e.g., players as we defined them can 'have their cake and eat it'). Setting up a diagram (similar to the well-known 'prisoners' dilemma') points clearly that there will be strong rhetoric, but weak or no action that would destabilize equities.