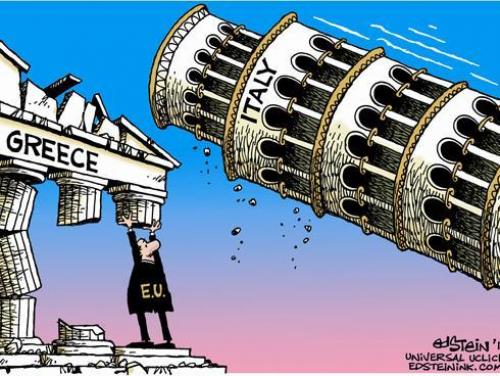 While a political crisis in the world's 9th largest economy (International Monetary Fund figures, 4/17/18) would normally not be enough to cause an international meltdown, given how thin the global economic ice has become as a result of ever-increasing debt loads, even small disruptions can create systemic problems. But from my perspective, what makes the Italian drama so interesting is that it parallels so precisely developments in the United States. It's amazing that more Americans do not realize, that when looking at Italy, they are looking at a fun house mirror reflection of the United States.

Italy is currently dealing with the results of an election in which populist political forces scored a big victory over the establishment, which they had judged to be both corrupt and ineffective.

In other words, the Italians replayed the 2016 Presidential election in the U.S. The big difference is that here the anti-immigrant tendencies of the right and the economic populism of the left were united in one person: Donald Trump. In Italy, those positions are represented by two separate parties that normally would be rivals. But politics can make very strange bedfellows, and the absurdity of the current economic reality has made them partners.