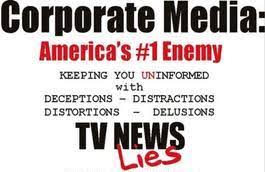 Failure to do so, he warned, would lead to the destruction of our democracy. Or something like that.

Labeling President Donald Trump the "greatest threat to our democracy," Friedman may sound like just about every other unhinged Left-wing kook journalist in America today — and he does.

But the ongoing cacophony of the unhinged Pravda media is what really threatens our democracy.

"Look, these midterms are soon to be upon us," Friedman said, almost breathlessly. "And I have one piece of advice for people: You have to vote for a Democrat because — and I say that as someone who, you know, I have very conservative issues on a lot of things. I'm free trade. I'm pro-globalization, pro-business.

"But the fact is, John, the worst Democrat running in the Congress or the Senate today is better than the best Republican because the best Republicans except those who are tragically dying or retiring simply won't stand up to this man," he continued. "And if you see the norms that he is violating, the way he is trashing our most cherished institutions — things like the FBI, the Justice Department, the spreading of conspiracy theories from the bully pulpit of the White House — that is a threat to the fabric of our society and fabric of our democracy."

So is the problem just that Trump is 'violating norms' or that he's really violating 'Washington norms?' Because if it's the latter, there are tens of millions of Americans who are ready to join him.

Trump is an unconventional president, to be sure, but that's his appeal to his loyal core of supporters. Americans were tired of reheated, blow-dried RINOs running as Democrat-lite candidates who would, if elected, ensure that "business as usual" was the order of the day in Washington.

And that business as usual mentality is what has harmed our democracy. Just look at the "normal" functions of Obama's FBI and Justice Department, which — and this is the only word to describe it — spied on a rival presidential campaign. That's what happened. Then, to top that off, Trump's campaign has been saddled with a "special counsel" investigation…for no good reason. (Related: Mueller's 'witch hunt' probe has now risen to the level of a national security threat.)

But Pravda journalists like Friedman are attempting to frame Trump's criticism of that outlandish and possibly illegal behavior as the primary threat to our country's survival, not the act of violating our trust with a bogus "counterintelligence" investigation based on no evidence whatsoever.