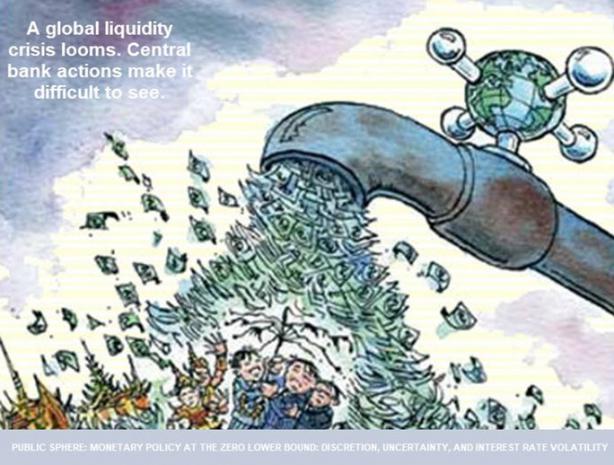 Jim Puplava thinks a liquidity crisis is on the horizon. I agree, adding that the problem is global.

In total, index funds represent $7 trillion of U.S. stock funds that have no active manager. All buying and selling are done automatically. Active management has gone out of fashion, Puplava noted, and as this sea change occurs, the market's ability to price companies diminishes.

"It's really mindless investing," Puplava said. "The crux of the problem is that mutual funds own more bonds that seldom trade than ever before, but they're still promising to pay out investors within seven days of redemption, a promise they may not be able to fulfill in the next downturn or crisis."

The problem is global.

Central bank actions explain most of what you need to know. Italian bonds provide a good example.

Despite the recent, massive selloff in Italian bonds, 10-year Italian bonds still trade at roughly the same yield as US 10-year bonds.

Is there no default risk? No eurozone exit risk?

Of course there is. But those bonds trade where they do because the ECB is engaged in QE to a far greater extent than the the Fed ever did. How nuts is that?

88% of the S&P is with Vanguard, BlackRock, and State Street. How nuts is that?

Close to $7 trillion in bonds trade with a negative yield. The figure was close to $10 trillion at one point. How nuts is that?

According to LCD, covenant-lite loan now account for a record 75% of the roughly $970 billion in outstanding U.S leveraged loans.

Covenant-lite agreements vary, but they allow things like paying interest with more debt rather than cash or skipping repayments entirely for periods of time. How nuts is that?

Finally. Proof that precious metals prices have been manipulated…

Quants Discover A Guaranteed Source Of Alpha: Just Trade Based On The Growth Of...