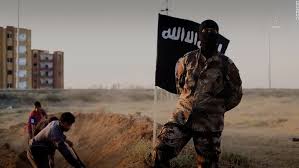 In an apparent attempt to remove all pretense that the United States is nothing more than al-Qaeda's Air Force in Syria, the American government is warning its Syrian counterpart that, if the SAA moves ahead with its upcoming southern offensive to remove ISIS and al-Qaeda terrorists from its southern borders, the U.S. will take "firm and appropriate measures."

In other words, the United States is telling Syria that it had better not attack ISIS forces or else. Indeed, American "Firm and appropriate measures" seems like a very thinly veiled threat of military action particularly since the United States seems incapable of taking any "measures" that aren't "kinetic" in nature outside of its borders.

After liberating the Yarmouk camp south of Damascus and quickly liberating a stretch of territory between Homs and Aleppo, the Syrian military is building up forces in the south of the country in a much anticipated move to liberate Daraa and the surrounding areas bordering with Jordan and the Israeli-occupied Golan.

Of course, while no one who has been following the Syrian crisis would be surprised that the nation who funded, organized, trained, armed, and directed terrorist forces in Syria (including ISIS), would do whatever it could to protect its proxy army, it is rather surprising to see the U.S. government so openly state that ISIS terrorists are "off limits" and to do away with even the formalities of pretending that it wants to see Daesh destroyed. As al-Masdar News reports,

The US State Department issued a statement late Friday saying it was "concerned" by leaflets, which were reportedly dropped by government aircraft in the province of Daraa.

According to reports circulating among pro-opposition monitors, the leaflets called on the militants to stop fighting and reconcile with the Syrian government, otherwise they would allegedly "gamble their lives" and head to "inevitable death."

"We also caution the Syrian regime against any actions that risk broadening the conflict or jeopardize the ceasefire," said spokeswoman Heather Nauert, noting that the ceasefire had been reaffirmed by Washington and Moscow last November. "As a guarantor of this de-escalation area with Russia and Jordan, the United States will take firm and appropriate measures in response to Assad regime violations," she added.

The fact is that the United States is watching its plan to destroy the Syrian government fail before its very eyes. Now, it is moving to enact "Plan B," aka the "federalization" of Syria into "microstates" to the benefit of Atlanticist geopolitical goals and the regional positioning of Israel. In order to do so, it is necessary to keep as many terrorist elements inside Syria as possible in order to keep the Syrian government under constant pressure and ensure the delineation of ethnic/religious boundaries. The presence of ISIS in southern Syria also gives the United States a reason to remain in Syria since it claims its presence in the country revolves around the destruction of ISIS. Of course, even that reason would not change the fact that the American presence is entirely illegal.