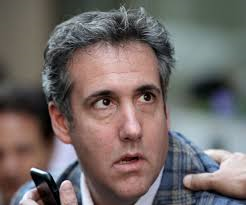 Journalist Ronin Farrow is back with another bombshell report - this time from the person who leaked Michael Cohen's banking records, detailing "pay for play" type payments from the likes of Novartis and AT&T.

The official, who has spent a career in law enforcement, told me, "I have never seen something pulled off the system. . . . That system is a safeguard for the bank. It's a stockpile of information. When something's not there that should be, I immediately became concerned." The official added, "That's why I came forward."