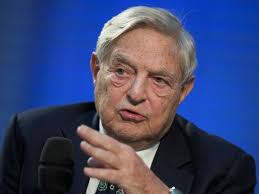 The organisation's departure will be poignant for the 87-year-old financier-cum-philanthropist who emigrated from Hungary after World War II.

But the anti-Soros rhetoric is far from being limited to just Hungary.

Soros, listed by Forbes magazine as one of the world's richest men, is accused by nationalists around the globe not just of stoking immigration but also of backing coups, sponsoring protests, and seeking to push a liberal, multicultural agenda.