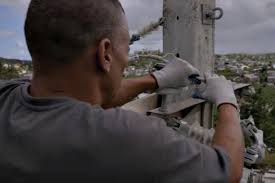 While everyone else was waiting for the government to restore power to Puerto Rico, Oscar Carrion and his friends went in together to buy a bucket truck and taught themselves how to repair wiring.

Thousands of people in Puerto Rico remain in the dark eight months after Hurricane Maria wiped out the island's already degraded electrical grid. The infrastructure was in such bad condition, some people predicted it could take a year or more to restore the electricity.

Getting aid to the US territory was delayed by red tape, and millions of residents went without food, fresh water, and shelter. The process of restoring the power has been laborious and lengthy. In December, there were still more than a million residents without electricity.

Then along came Oscar Carrion.

The hero of this story isn't the government. It is a resident of Puerto Rico who got together with his friends and decided that something had to be done. And they took responsibility and did it themselves.

Oscar Carrion, a father of four, got together with a group of friends to purchase a used bucket truck for $2500, which they collected from people in their neighborhood. Then, they taught themselves how to repair the wiring and poles that had been destroyed by Hurricane Maria. Completely self-taught, they risked their lives to restore the power to places in the island that the government hadn't gotten to.

Watch this short video about the citizens' teamwork.

Think the Government Will Save You? Puerto Ricans Find Warehouse FULL of Emergency Supplies Stashed