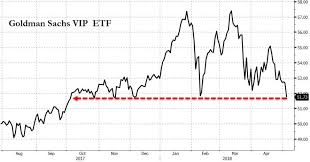 Last week, when looking at the index of the 50 most popular hedge fund positions, also known as the Goldman Sachs Hedge Fund VIP index, or as we call it the "hedge fund hotel California" as one can rarely if ever check out painlessly once one arrives, we noted something troubling: despite a market that was largely unchanged for 2018, the 50 top hedge fund names have been sliding, in what appears to be the ominous tail end of a head and shoulders formation, suggesting that something troubling was taking place below the surface of the otherwise bubbly hedge fund community:

... it appears that the latest cycle of outperformance is now over, because as the following sloping head-and-shoulders chart in the GS HF VIP index shows, the bottom is about to fall out for the 50 most popular hedge fund names, as suddenly instead of frontrunning purchases, hedge funds will scramble to liquidate first before everyone else. And not to make a too fine point of it, Bloomberg also adds that "today feels like a liquidation day from popular hedge fund holdings" - because the HF VIP index is tumbling by 1.8%, its biggest drop in months, and set for the lowest close since December, wiping out all 2018 gains. Needless to say, its correlation with the S&P is almost 100%.

As shown in the chart below, this particular index was nothing more than a high beta version of the S&P, and unlike the S&P, was trading at the lows of the year.

Our conclusion, when looking at the chart above, was that for whatever reason, a liquidation appeared to be spreading within the hedge fund community.

Now, in a report by Goldman Sachs, the bank's equity strategist Ben Snider also points out that whereas retail sentiment, which tumbled ahead of Q1 earnings season, has rebounded most of the way as we near the end of said earnings season (the best since 2010), hedge fund favorite stocks have underperformed sharply.

Goldman should know: after all it is their index that tracks these favorite stocks; which is why the following warning from Goldman is particularly ominous to the hedge fund community, which by some odd coincidence, has found itself largely invested in the same 50 or so stocks:

Investors should be attentive to the positioning dynamics currently driving stock performance. If the S&P 500 takes another turn lower, popular positions will likely underperform, with mutual fund and retail favorites particularly vulnerable, while hedge fund favorites look poised to outperform if the market continues to rally.

Some more details from the report, which juxtaposes the skittish mindset of retail investors earlier in the year alongside hedge funds' "rock solid" positioning, and how these two inverted as earnings season progressed, or in other words, how the smart money has been selling to the dumb "retail money":