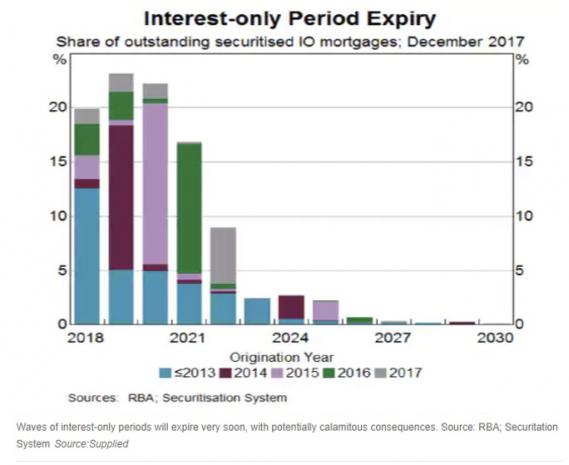 Day of Reckoning: Hundreds of thousands of interest-only loan terms expire each year for the next few years.

Every year for the next three years, up to an estimated 200,000 home loans will be moved from low repayments to higher repayments as their interest-only loans expire. The median increase in payments is around $7000 a year, according to the RBA.

What happens if people can't afford the big hike in loan repayments? They may have to sell up, which could see a wave of houses being sold into a falling market. The RBA has been paying careful attention to this because the scale of the issue is potentially enough to send shockwaves through the whole economy.

In 2017, the government cracked down hard on interest-only loans. Those loans generally have an interest-only period lasting five years. When it expires, some borrowers would simply roll it over for another five years. Now, however, many will not all be able to, and will instead have to start paying back the loan itself.

Fresh hope in the search for missing MH370 as suspected aircraft debris washes up ...

Qantas seven-hour flight to nowhere sells out in 10 minutes

Why I Diaper Report