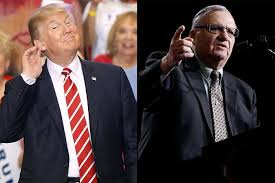 On August 25, 2017, Trump pardoned Joseph M. Arpaio, the longtime sheriff of Maricopa County, Arizona, for his conviction for criminal contempt of court on July 31, 2017. He had not yet been sentenced.

On March 9, 2018, Trump pardoned Kristian Mark Saucier, a former U.S. Navy sailor, for his conviction for unauthorized retention of national defense information on August 19, 2016. He was sentenced to 12 months' imprisonment and three years' supervised release, conditioned upon six months' home confinement and the performance of 100 hours' community service.