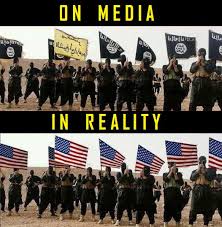 What does the United State and ISIS have in common?

Actually… a lot. According to the New York Times, ISIS started a pretty effective government. They now appear to be on their last legs. But for a time, ISIS had all the hallmarks of a typical government.

They monopolized control in a geographical area. They collected taxes and administered government services. They provided internal security, as well as a military (to attempt) to repel invaders. They even educated the youth and provided government assistance to widows.

In June 2014, after it captured Mosul, Iraq's second-largest city, the Islamic State wanted both legitimacy and revenue. To get that, it used armed militants — and seasoned bureaucrats. There were even forms for suicide bombers to fill out.

ISIS took land from 'nonbelievers,' and rented  it to those deemed worthy.

The militants targeted landowners who did not share their strict Sunni faith. Then they rented the land out to farmers like Ghanim Khalaf. He wanted five acres — and he found a property that he believed belonged to a Shia family. Workers then went out to map the property and determine whether its former owner practiced the "wrong" religion.

Sorry ISIS, but Karl Marx came up with that idea about 170 years ago. in The Communist Manifesto, Marx and Engels described the steps needed to form a utopian communist government. One step was the "Confiscation of the property of all emigrants and rebels."

The U.S. has been confiscating property from rebels and giving it to warriors for years. We call it civil asset forfeiture. In 2014, law enforcement in the United States stole over $5 billion worth of cash, cars, and property from people without convicting them if any crime. Burglars stole less than $4 billion from their victims in that same year.