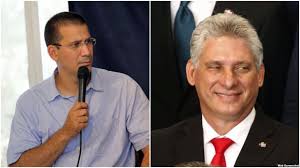 Havana (AFP) - Cuba turns to a model Communist Party official, Miguel Diaz-Canel, to steer it through a period of uncertainty when it finally turns the page on the Castro era in a vote on Thursday.

The 57-year-old First Vice President is the pre-ordained choice of Raul Castro as he steps down, ensuring that the vote in the National Assembly to appoint him will be little more than a formality.

The successor to Fidel and Raul Castro has spent three decades climbing to the summit of the Communist Party. He is ideally placed to continue to implement the economic reforms initiated by his 86-year-old mentor.

He will be the first Cuban leader born after the 1959 revolution -- and perhaps crucially for some of the generals that will be under his command -- the first not to have fought in it.

"There is a tradition in Cuba of strong men at the head of the State," said Cuban watcher Arturo Lopez-Levy of the University of Texas-Rio Grande.

But "the profile of Miguel Diaz-Canel seems weaker," Lopez-Levy added.

"He has no more power than what he has been given."

In Havana's corridors of power, the jeans-wearing Diaz-Canel stands out, a self-declared fan of The Beatles with a passing resemblance to the actor Richard Gere.

He has advocated greater openness to the internet and a less restricted press.

His supporters say he knows how to listen and is a man of simple tastes.

Though he was often portrayed as a moderate with a quiet disposition, a video of a private meeting with Communist Party members released last year showed another side -- a ruthless man with hardline views lashing out at Cuban dissidents and the US.

He has avoided interviews and controversy in general, and speaks only at public meetings. A father of two children from his first marriage, Diaz-Canel remarried, to Liz Cuesta, an academic specializing in Cuban culture.

After studying electrical engineering in the central province of Villa Clara, he became a university professor before going to work for Cuba's all-powerful Communist Party.

In 1994, he was appointed the party's provincial secretary in Villa Clara, where locals were impressed to see him riding his bicycle, portraying a simplicity uncommon among the regime's leaders.

In 2003, while serving in the eastern province of Holguin, he joined the select 15-member Political Bureau, an essential step for any aspirant to power.

In 2009, Raul Castro, who had inherited power from his ailing brother Fidel three years earlier, tapped him to be higher education minister.

Then, in March 2012, he acceded to one of the eight vice-presidencypositions in the Council of Ministers. And in 2013, he was appointed to the powerful Council of State.

If he assumes the presidency, he will be the head of the Armed Forces and have to deal with the guard generals who have been part of the military apparatus since the Revolution.diaz

Trump Regime War on Cuba by Other Means

The Evil, Immoral, Vicious, and Hypocritical Embargo Against Cuba

Facing crisis, Cuba calls on citizens to grow more of their own food

My rabbit for your detergent? Cubans turn to barter as shortages worsen

Lift the U.S. Embargo on Cuba

Lift the U.S. Embargo on Cuba

Cuba is Testing Products Against Cancer, Alzheimer's and Parkinson's Disease

Mag 7.7 quake hits between Cuba and Jamaica, but no injuries

Cuba Was Never a Threat to "National Security" by Jacob Hornberger