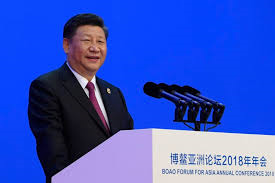 In a speech that officials had billed as a major address, Mr. Xi said Tuesday that plans are under way to accelerate access to the insurance sector, expand the permitted business scope for foreign financial institutions and reduce tariffs on imported automobiles and ownership limits for foreign car companies.

Throughout his 40-minute address, Mr. Xi never mentioned the trade friction with the U.S. or President Donald Trump. His remarks seemed designed to offer some policy initiatives, if not concessions, while drawing a contrast with President Trump's "America First" agenda and portraying China as a steady global partner committed to the international trade order.

"In a world aspiring for peace and development, the Cold War and zero-sum mentality look even more out of place." Mr. Xi told the Boao Forum, a government-backed gathering of business and political leaders on the tropical island of Hainan.