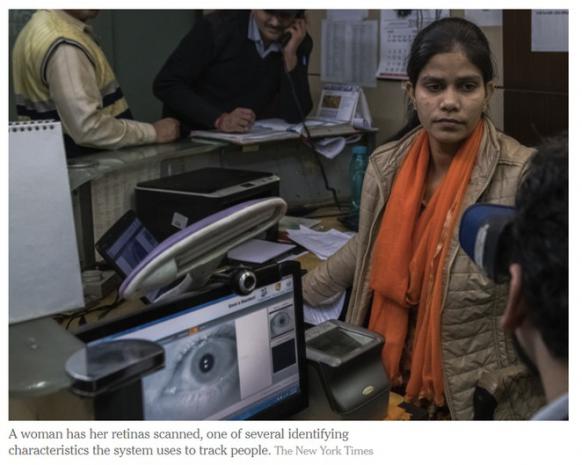 Seeking to build an identification system of unprecedented scope, India is scanning the fingerprints, eyes and faces of its 1.3 billion residents and connecting the data to everything from welfare benefits to mobile phones.

Civil libertarians are horrified, viewing the program, called Aadhaar, as Orwell's Big Brother brought to life. To the government, it's more like "big brother," a term of endearment used by many Indians to address a stranger when asking for help.

Prime Minister Narendra Modi and other champions of the program say that Aadhaar is India's ticket to the future, a universal, easy-to-use ID that will reduce this country's endemic corruption and help bring even the most illiterate into the digital age.

The poor must scan their fingerprints at the ration shop to get their government allocations of rice. Retirees must do the same to get their pensions. Middle-school students cannot enter the water department's annual painting contest until they submit their identification.

The Modi government has also ordered Indians to link their IDs to their cellphone and bank accounts.

How China and India Matchup Militarily if the Border War Escalates

You Won't Believe What's Being Used In The China-India Border Fight!