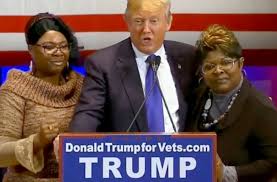 "Diamond And Silk have been corresponding since September 7, 2017, with Facebook (owned by Mark Zuckerberg), about their bias censorship and discrimination against D&S brand page," they wrote.

"Finally after several emails, chats, phone calls, appeals, beating around the bush, lies, and giving us the run around, Facebook gave us another bogus reason why Millions of people who have liked and/or followed our page no longer receives notification and why our page, post and video reach was reduced by a very large percentage," echoing the complaints of many conservative and pro-Trump pages.

Here is the reply from Facebook. Thu, Apr 5, 2018 at 3:40 PM: "The Policy team has came to the conclusion that your content and your brand has been determined unsafe to the community."

They posed several questions to Facebook and Zuckerberg, including, "What is unsafe about two Blk-women supporting the President Donald J. Trump?"

"This is deliberate bias, censorship and discrimination. These tactics are unacceptable and we want answers!" they wrote.

Diamond and Silk shot to fame after the Drudge Report linked to several of their videos and they made appearances with then-candidate Trump on the campaign trail.

One of their big moments came when they tore into Republican debate moderator Megyn Kelly in 2015.

Lynnette Hardaway and Rochelle Richardson produced, "Megyn Kelly and that Damn Debate," in August when it was called "The Viewers View":